Today is March 15, when one still hears portended, “beware the ides of March.” These ominous words remind us of a historical event which occurred over 2000 years ago—the stabbing of Julius Caesar .

According to legend, a seer had warned Caesar that harm would come to him by the Ides of March. Little did he know that a man who was like family to him, Brutus, and one of his dear friends, Cassius, along with many others had conspired to end his life. They cajoled Caesar to meet with them—not at the normal Senate building, but at the Theatre of Pompey.

The conspirators viciously stabbed Julius Caesar to death ending his life and the Roman Republic. His assassinators had underestimated the aftermath of his death. At his funeral procession, the crowds moved his body to a pyre on the Forum and gave him a cremation fitting a “father of the country.” Julius Caesar was deified and his life memorialized for all time since. His “adoptive” son, Octavius, took over rule of Rome ushering it into an empire. Today, people still toss flowers on the spot where Caesar’s body was burned.

The area near where the Theatre of Pompey stood is a thriving hub of Rome. A big square called Largo Argentina (Largo di Torre Argentina) lies atop the archaeological remains of some of the temples near the place where Caesar was assassinated. The rest of the area leading to the arena, and the theater itself, are covered by various buildings. Some of them afford lucky patrons or dwellers the ability to catch a glimpse of the remains of the great showplace.

But the remains of Largo Argentina are available for all who walk around the bustling square with its many shops, eateries, bus stops, and tram crossings. A cat sanctuary rests among the ruins and one can sit and watch felines wander among the temple ruins preening and acting like gods themselves.

Jon and I enjoy getting pizza al taglio from Pizza Florida to eat while sitting near the plexiglass surrounding the archaeological site. Many a night, we enjoy an aperitivo in the same location.

Currently the remains are closed off to anyone but the cats, but the Italian luxury brand Bulgari has donated a large sum of money for restoration purposes and its reported that the site will open to the public sometime in the future (I’ve learned not to count on dates). I can’t wait!

Traveling by train in Italy is quick, efficient, and affordable. ItaliaRail works through Italy’s Trenitalia train system to offer you tickets through their English website with their 24/7 customer service line (in English) and the ability to pay in dollars, pounds, or Euro without foreign exchange fees. Check them out through our partner link: https://italiarail.2lka.net/eG03z 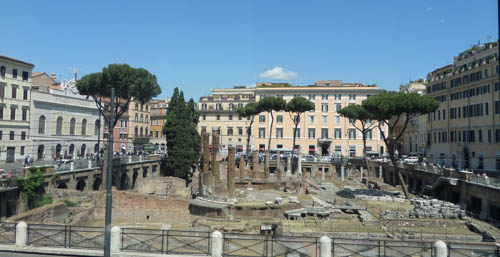 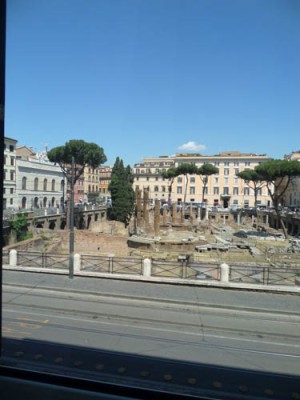