A Roman Guy (now the Tour Guy) representative greeted us in front of Basilica San Clemente—a rather unassuming church a couple of blocks behind the Colosseum—letting us know that we had found the correct place to start our tour. Since we took the bus, we had arrived early and chose to explore the church a little on our own. There was hardly anyone in the basilica and I was able to sit and take in all the grandeur of the building. We then went across the street for a quick caffe (espresso) and cornetto (croissant) before our morning of seeing fabulous Rome attractions would begin. Soon thereafter a bicyclist pulled up with items we would need for the adventure and Michele (pronounced Mee-kell-ay), our guide, arrived. Our “Rome Catacombs and San Clemente Underground Tour” began and I was bouncing with excitement to see what historical tidbits I would learn and what archaeological sites I would explore.

History-hopping across eras can be confusing for professional historians let alone laypersons, so I appreciated that Michele took us to the oldest section of the church first and worked his way upstairs to the current church dating from the early 12th century. There are three levels of Basilica San Clemente to explore (a fourth level with buildings from before the 64 AD fire lies underneath but is not open for general viewing): the 12th century basilica with golden mosaics, decorative floors, fantastic frescoes, and a magnificent ceiling; a 4th century church with frescoes telling the story of Saint Clement—an early pope who died around 100 AD; and a 1st century level boasting what may have been a workshop and many rooms dedicated to the Mithraic mystery cult. Little is known about this religion and Michele was careful to warn us of that fact, but he was able to place into context the altar and other structures we saw and explain what scholars commonly believe regarding Mithraism. Fun fact: the creator of the Smurfs may have modeled the cap that they wore after the Phrygian cap associated with Mithras’ followers.

As we descended deeper and deeper beneath the current basilica, the layers of time peeled away. The sense of transporting through the past was very real. In the mid-1800s, Father Joseph Mullooly started excavations into the area after noticing a high moisture content and hearing a dripping noise ( a source of water flows robustly in the 1st century level). It was in these initial excavations that the 4th century church was uncovered. Subsequent digs would unearth the third level dating from the 1st century and a Republican-era 4th level. It was powerful to me to recognize that people had been worshipping on this spot to one god or another for 2000 years.

After finishing a thorough and enjoyable tour of Basilica San Clemente, we got into our private coach and headed out to the Appian Way. It was nice to have air-conditioned comfortable transport to our next spot outside of Rome’s ancient city walls.

Domitilla, a wealthy woman related to the emperor Vespasian, funded the construction of these catacombs to house martyrs, Nereus and Achilleus—Roman soldiers who had refused to punish Christians. For her actions, she was exiled to Capri. Although today many of us probably wouldn’t mind such a fate, for Domitilla this was a sorrow as it meant she was banned from the center of the world.

The Catacombs of Domitilla are the oldest on the Appian Way and also feature a complete underground basilica to visit. The tombs, dug out of tufa stone, spread over 17 kilometers. There are almost 150,000 burials on four different levels! As we entered the labyrinth, I was certainly happy to have Michele guide us. The catacombs were used for centuries for various activities—some illegal, some illicit. Lovers engaged in trysts there. Bandits hid their stolen wares in the tombs. Graffiti can be found throughout the tunnels. I could clearly read the date 1692 next to the name Marco. An inscription proclaimed that the someone owed the graffiti author money. Also within the catacombs is a second-century fresco of the “Last Supper.” We weren’t allowed to take photos of the tombs (this is a sacred resting place), but could take them of the underground basilica.

We then jumped back into our coach and were taken further down the road from the catacombs to the ancient Appian Way (Appia Antica). Michele showed us worn stones paving a road that has been in use since antiquity. He told tales of slave rebellions and the power of the Rome in antiquity. Our driver took us back from the Appian Way to near our tour’s starting point. I cannot underestimate how valuable this part of the tour is. I have explored the Appian Way on my own and found that finding return transportation that was inexpensive and conveniently located was rather challenging, so this service of the tour was especially attractive to me.

It was a little after 12:30 when our tour ended, so Michele provided us with ideas for lunch. As I have noticed in previous tours with The Roman Guy, our group felt closer after the tour because of the easy-going manner of our guide. The Roman Guy tours foster a sense of camaraderie and make you feel like one of the “cool kids.” The small size of the group made the tour feel luxurious and far more expensive than its rather economical price of 69€ (price includes private transfer, admission fees, and a knowledgeable and engaging tour guide). If you use our link, you can save money.

There are many wonderful things to do in Rome—so many, in fact, that it can be almost overwhelming. A tour such as the one we took provides a lot of “bang for the buck.” As you will find, many Rome attractions are woefully lacking in explanation. You may find yourself a little lost trying to make sense of all the ruins. A good tour brings the past alive focusing on a few interesting stories. Rome has thousands of years of history. And sometimes, such as at Basilica San Clemente, the levels of history pile up one atop each other. I had toured the church years before and found it quite confusing due to a lack of placards, but The Roman Guy tour made me see it in a whole new light and it was spectacular. Although we received this tour gratis, all of my opinions are my own and I am under no obligation to write a favorable review—I am because I feel my readers would really enjoy this tour. We went to lunch with another couple afterwards and they had positive comments, too. Therefore, I highly recommend taking the “Catacombs and San Clemente Underground” tour the next time you’re in Rome. Buon viaggio! 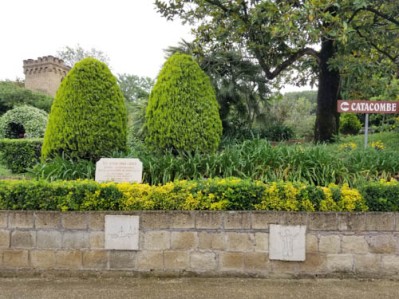 Pathway leading to Catacombs of Domitilla 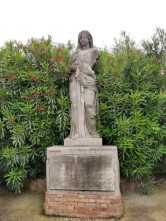 Statue out front of catacombs 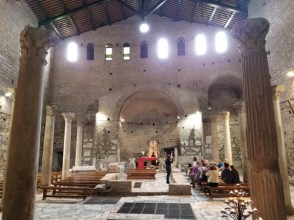 Our tour group on the Appian Way 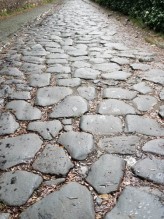