Even if you’ve never been to Rome, you probably can conjure up an image of the Trevi Fountain. From the opening toss of Three Coins in the Fountain to the sensual scene in La Dolce Vita where Anita Ekberg wades in the fountain, cinema and the fountain’s stunning design have made this Baroque bubbler a popular Roman destination. 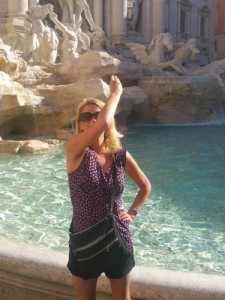 Legend has it if you toss a coin in the fount you will return to Rome. I must say it works, as I’ve done it every time I’ve gone and I keep finding myself in the Eternal City every year. To do it properly, you should throw the money with your right hand over your left shoulder.

Having wished upon the Trevi Fountain many times now (and with unfavorable exchange rates), I’m getting kind of cheap and make sure that I’m only tossing low-denomination Euro. If you want to give more though, it would be a charitable work. I’m not sure the fountain gods will look on you more favorably but Caritas, the Catholic organization that benefits from the coins, undoubtedly will. In 2016, over 1.5 million was thrown in the water—a sizeable increase from the 600,000 collected in 2005. Wishing wells are lucrative in the 21st century!

Some tales report that tossing two coins will bring you love. Since I already travel everywhere with mi amor, I haven’t needed to do that and can’t report on the veracity of the claim. Some movies will have you believing that wish works, too. Regardless, the Trevi Fountain is a molto romantic place to visit—especially at night. When the fountain is lit at night, water bubbles forth as shadows play across the surface. Sounds from nearby street musicians contribute to the enchanting scene. I’m often swept away for a moment by the fount’s beauty. For a few magical moonlit moments, I can block out the hundreds of people teeming around the site and let the monumental sculptures bewitch me.

If you want to have more peace and quiet for your coin-tossing, come early in the morning. Before the day-trippers make their way into the city and while everyone is queuing up for the Colosseum or Vatican Museums, you can have the place virtually to yourself.

The Trevi was designed by Nicola Salvi and finished in 1762 by Pietro Bracci. Rome’s modern aqueduct, the Acqua Vergine (an extension of the ancient Aqua Virgo), bursts forth at the fountain. The original aqueduct had been around since antiquity and during the 17th century, discussions had occurred about creating a fountain at the end of its modern extension, but it wasn’t until Pope Clement XII held a competition in 1730 that a design was agreed upon. 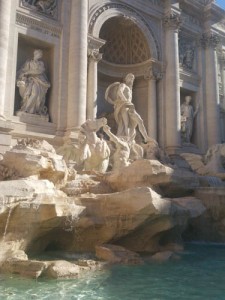 The resulting monumental travertine and marble fountain blended in perfectly with Palazzo Poli behind it thanks to an update to that mansion’s façade. Huge Corinthian columns create a breathtaking backdrop for a story of the gods, which is depicted through huge statues above the main basin of water. A figure of Oceanus astride a chariot led by two horses jockeyed by Tritons stands in the middle of the Trevi. The god is muscular and fierce. One horse is rearing up, while one seems quite serene. To the sides are statues representing abundance and health. Abundance has a vase at her feet spilling forth water. Salubrity (health) holds a cup from which a snake drinks.

Built into the palatial exterior behind the Trevi is an inscription honoring the pope who conduct the competition. It states: Clemens XII Pontifex Maximus decorated the Virgin Aqueduct and committed it with abundance and salubrity to the magnificent cult in the year of our Lord 1735, the sixth year of his pontificate. Under this inscription is another that tickles my fancy, it reads: Benedict XIV Pontifex Maximus made perfect. I guess Pope Benedict wanted his due credit.

I suggest taking some time to ponder the scene. You’ll want to wander around to the little side alcoves, too, which provide great vantage points (and fewer crowds than the front).

The first time I visited the Trevi was in 2013 when it was distinctly dingier than it is today. Thanks to the Fendi Corporation the fountain is sparkling bright. The fashion house paid for an extensive cleaning and restoration in 2014/2015.

The Trevi Fountain will not be found on the lists of any “hidden Rome” sites, but I encourage you to brave the masses of people and see it for yourself. It will be worth navigating through the crowds to see it. As with any of the famous historical sites of Rome, pick-pockets may be roaming around though so make sure you watch your valuables. This shouldn’t deter you from visiting the Trevi Fountain and tossing your own coin. It is site not to be missed…plus you don’t want to risk not returning to Rome, do you? Remember…right over left.

Location: Rome’s streets are often tiny and confusing. Find via del Corso and follow the signs from there. There is a sign for the McDonald’s Trevi Fountain location (aka Fontana di Trevi)—use that sign on via del Corso to show you where to veer off from the larger street. 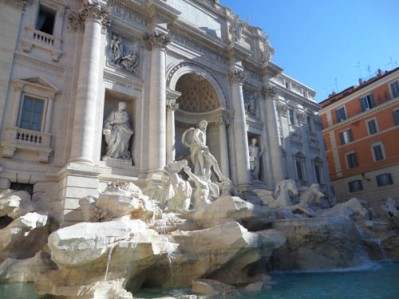