The Leaning Tower of Pisa—is a worth a visit? Described as overrated and disappointing, some travel writers advise seeing the Leaning Tower of Pisa only to put a check mark in a box. Many articles called the tower a “tourist trap,” alluding that it would be a waste of time and money to visit Pisa. Boy oh boy, I’m glad I don’t believe everything I read, because I found Pisa to be a charming, little town and the architecture found on the Field of Miracles (where one finds the Leaning Tower of Pisa) simply stunning.

I took a Trenitalia train from Santa Maria Novella station in Florence to Pisa Centrale. The trip cost under 10€ and took about an hour. As the train raced through the Tuscan countryside, I thought about how Florence had ruled Pisa for a time. Galileo was from Pisa, but was then hired by the Medici to work in Florence. Did he travel to see his family on the same route I was on?

For the first three centuries of the 2nd millennium Pisa was a European superpower, its power peaking around 1200. Its location on the Arno River and proximity to the sea meant it rivaled Venice and Genoa as a maritime power. Pisa was a republic; they built the Field of Miracles with the riches that trade had afforded them (too bad that pesky tower caused them engineering embarrassment!). Once Pisa’s power declined, the university still afforded it prominence. Galileo even studied there and was later the chair of the University of Pisa’s mathematics department. The Leaning Tower is rumored to have been a scientific testing ground for Galileo. 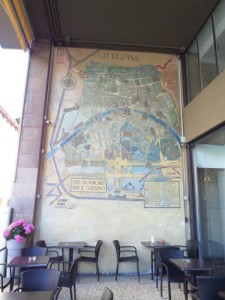 By the time I reached the train station, I couldn’t wait to see the town and visit some of its more famed spots. The Field of Miracles was sure to be the show-stopper, but I also planned to see old university buildings, various piazzas, and other historic buildings in town.

The walk from the train station to the Field of Miracles took about thirty minutes at a fast clip, but I moseyed along snapping photos. The first piazza I came upon was right outside the station, Piazza Vittorio Emanuele II, named after the first king of a united Italy. Next, I walked down a portico-covered street of shops and restaurants.

I veered off the main drag here and there—once being rewarded with the most charming little square, Piazza Chiara Gambacorti. Yellow buildings surrounded benches covered by the shade of trees. Muted orange-hued walls provided a striking complement. I forayed down a gorgeous street eventually meandering back to Corso Italia—the main street.

After crossing the Arno River, I marveled at Piazza dei Cavalieri (Knight’s Square) with its old clock building. In medieval ages, the square was the seat of Pisan government. Frescoes on the buildings show the faded elegance of the area. The Church of San Stefano had a pretty façade, not intricate like their main chapel, but a beautiful addition to the square. The buildings of the University of Pisa are spread out all around the area.

After moseying along for a while and encountering some Roman ruins, I came upon the city walls. The massive gate served as a warning that I had gone far enough. The Tower had to be inside the borders of the fortification, so I turned left at the last main street before the wall.

Shortly after taking a turn, the Field of Miracles appeared before me. When the Leaning Tower came into view, I was taken aback. A big smile overtook my face. It was splendid, magnificent, deserving of the hype.

The rest of the area was equally as grand. The baptistery was an intricate masterpiece of Pisan Romanesque architecture that looked as if it was dripping in lace.

Their duomo (main cathedral) was another beauty. Huge bronze doors were topped by four levels of columns. Each level drew the eye up higher and higher ultimately one’s view eventually alit upon statues at the top. As I looked straight at this magnificent church I had to chuckle. Because of the Tower’s lean, it peeks out in the right-side background of the duomo. It’s as if it was saying, “look at me, look at me!”

I thought of all the travel articles I had read stating that Pisa was a rip-off, a tourist trap, and much smaller than one thought. Had they visited the same place I had? It’s called Campo dei Miracoli—literally, the Field of Miracles. Did the authors know better than those who had dubbed the place miraculous? Had they transcended beyond being affected by these marvelous sights? Were they better arbiters of beauty than the artists and aesthetes of the past few centuries?

Negative authors were right about the town’s smallish size, but at least the city center is easily walkable. Complaints about the crowds were equally founded—the place is teeming with tourists. Be careful not to get your eye poked out by a selfie stick. Even with the hordes of people trying to get a picture of themselves “holding up” the Leaning Tower, I’m glad that I decided to venture out and see Pisa. It was truly a Tuscan treasure. 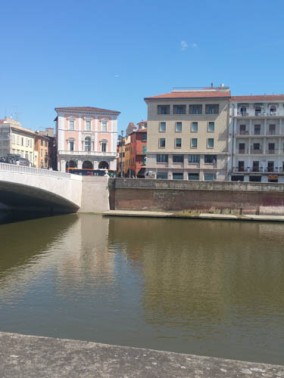 View of the Arno River 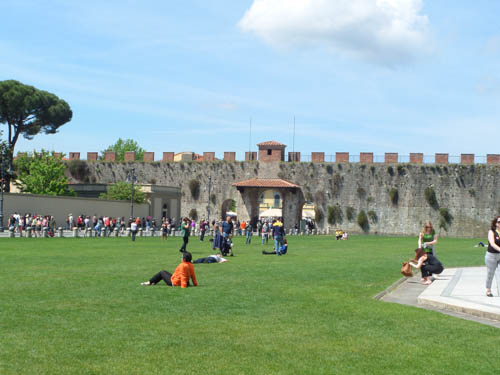