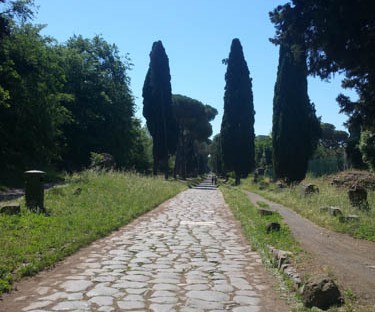 The Appian Way (via Appia) is an ancient roadway that highlighted the greatness of Rome. Today, it is one of the best attractions in Rome. Strategically important, it intimidated foes and friends alike since it meant that Roman legionnaires could mobilize and move out quickly. The Appian Way was one of Rome’s earliest roads—the first section was completed in 312 BC and used as a route for military supplies and the Roman legions during the Samnite Wars.

Its history includes gory moments such as the crucifixion of 6000 slaves thought to be involved in a revolt started by Spartacus in 73 BC. Walking down the street, I imagine what a gruesome (and threatening) sight it would have been to see all those bodies hung along the side of the via Appia.

The road played important roles in modern times too, especially during WWII when Allied troops who had landed at Anzio re-took Rome from Nazi occupation. Today, ruins of marble statues and benches line the road giving visitors a place to sit and an idea of how impressive it would have looked to those setting their sights upon Rome for the first time.

Ancient stones still line part of the Appia Antica (Ancient Appian Way) providing a snapshot into the past and allowing one to feel as if they have just walked down the road to a different millennia.

Where It Is: just outside the city walls starting at Porta San Sebastiano. A well-preserved massive gate giving access through the Aurelian Walls, the San Sebastiano gate is an impressive place to start your journey. The port is right near the Pyramide metro stop and gives easy access to the no. 118 bus that runs the Appian Way route. Not only is there a cool pyramid built into the wall nearby the gate, there is a museum there that details Roman walls and roads providing a nice overview for the rest of your Appian Way sightseeing. For more information on the Museo delle Mura: http://en.museodellemuraroma.it/

How to Get There:

The Appian Way will take at least a half day to visit. If it’s your first time to Rome and you have three days or less, it is probably best reserved for a time when you can truly relax and enjoy it. But do make it at some point! It is a treasure not to be missed. 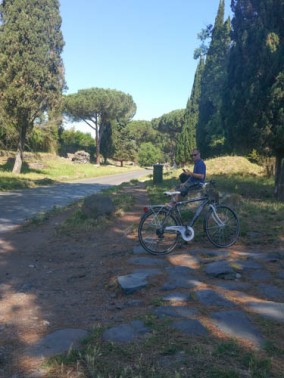 Rental bikes on the Appian Way

Goat run on via Appia Antica