Paris is the city of love. To me, nothing is more romantic than strolling down historic lanes uncovering a place’s past. The sites I’ll reveal for you in this article take us from the Enlightenment Era through La Belle Epoque (the Beautiful Time). For the best places to visit in Paris that were happening before the late 17th century, check out the first half of this series.

Wine and talk of revolution—could there be a better combination? As your Paris guide, my first stop on this half of the tour takes us to Le Procope—a restaurant in the 6th arrondissement that has been catering to revolutionaries since 1686. Enjoy a glass of wine in this historic café where Jean Jacques Rousseau philosophized, Voltaire satirized, Thomas Jefferson contemplated all men being created equally, and Napoleon reputedly left his hat. Some of Le Procope’s patrons would help foment the French Revolution. Although paved over, one can visit an important site of the Revolution—Place de La Concorde—where a guillotine separated the heads of its victims from their bodies. An obelisk and fountains decorate the public square. As the Revolution gained fervor, Parisians created a temple to house the ashes of the nation’s intellectuals—calling it the Pantheon (every god). This neo-classical building (circa 1790) is an architectural treat. The main floor features Greek columns, vaulted ceilings, a magnificent dome, excellent sculptures, beautiful murals, and Foucault’s pendulum. The crypt beneath houses the eternal remains of great thinkers, such as: Marie Curie, Voltaire, Jean Jacques Rousseau, Emile Zola, Louis Braille, Rene Descartes, and Victor Hugo. It is located in Paris’ storied intellectual hotspot—the 5th arrondissement.

If the Pantheon has whetted your appetite for bones, you might want to journey over to the Catacombs 14th arrondissement). The ossuary contains the remains of millions of Parisians who were transferred there starting in the late 18th century. Profound passages top the doorways, such as “Halt, this is the realm of Death.” Lines can be very long, as the number of visitors is restricted to 200 at any one time. Once you descend down, you have about two kilometers of bones to view before ascending at the other end.

To pay tribute to the dead above-ground with a triumphal arch in the ritzy 8th arrondissement, head over to the Arc de Triomphe. Napoleon ordered this monument built to honor the Grande Armee. Although the climb to the top is a stair-climbing workout, the view is magnificent! Before you unfolds the swanky grand boulevard of the Champs-Elysees. You can see Sacre Coeur, the Eiffel Tower, and other Parisian monuments. At the base of the monument is a continuously rekindled flame honoring the unknown soldiers who died during the Great War.

One of my favorite sites in Paris is a small museum with big impact—Musee de l’Orangerie. Set amid the Tuileries Gardens, this 1852 building was originally used to provide winter shelter for orange trees that lined the garden. Following WWI, it was decided that the space would be used to exhibit art and Claude Monet’s Waterlilies be showcased there. By this point Impressionist painters were en vogue—no longer the scourge of the art world. Monet oversaw the design of two oval rooms that would hold his eight oblong paintings. Natural light from the ceiling illuminates the paintings just as light would dance off the waterlilies on a pond. The effect is breathtaking. With famous paintings by Renoir, Matisse, Cezanne, Picasso, and more, the rest of the museum is not to be missed.

Had the French government not intervened, Waterlilies would have been exhibited at the Musee Rodin—our next stop on this tour. Auguste Rodin was one of the great La Belle Epoque artists. Like other nouveau artists of the day, Rodin’s work had run hot and cold. His statues were both genius and scandalous. During the Great War, Rodin donated his entire collection to France and his museum opened the year after the war ended. He desired that his museum be located at the impressive Hotel Biron (hotel describes a mansion) where his statutes could stand among rose gardens. I can’t imagine that a finer place could have been selected. Eve looks bashful hiding among bushes. The Thinker gazes contemplatively at roses. In the mansion, a nude couple, surrounded by mirrors, embrace in The Kiss. Wandering around the grounds, you can catch a glimpse of the gilded dome above Napoleon’s porphyry tomb. The Musee Rodin is perfectly splendid—an oasis of calm in the bustling 7th arrondissement.

To continue surrounding yourself with Gilded Age splendor and sumptuousness, hop over to the 8th arrondissement to experience the Jacquemart Andre Museum on the famed Boulevard Haussmann. Filled with important paintings, sculptures, tapestries, and objets d’art, the mansion shows how late 19th century wealthy Parisians lived. Wander through elegant bedrooms and indoor gardens. Imagine being entertained in the Grand Salon, dining with a fresco overhead, or listening to musicians play in the Second-Empire style Music Room.

Perhaps no monument is more famous than the towering structure built for the Exposition Universelle (World’s Fair) in 1889. The fair needed an exhibit that would symbolize the Industrial Age and man’s control over nature. Gustave Eiffel’s tower was just that—a sky-scraping, engineering marvel that would define its time. The Eiffel Tower is a testament to its designer, its laborers, and its time. As when it first opened, the monument still receives visitors from around the world—reserve your spot online. While looking down at non-reservation holders lining up as far as the eye can see, you will be happy you did. Tickets to the summit (very top) sell out quickly online, so make sure you purchase when they go on sale (I think at 8:30 a.m. CET).

Another world expo—the Universal Exposition of 1900—brought about the Petit Palais, the Grand Palais, and Pont Alexandre III (beautiful bridge). Designed in the ornate Beaux-Arts style, the two buildings now house various exhibitions while the gilded bridge provides a beautiful way to cross the Seine River. Dedicated to Tsar Alexander III (of the ill-fated Romanov family), the bridge’s opulence reminds of era’s excesses. Art Nouveau lamps light the bridge. It looks as if garland is draped along its side. Statues of nymphs, cherubs, fish, and sea monsters bring a sense of whimsy and evoke the nature themes of the Art Nouveau. Four golden winged horses perch atop colossal pedestals designed with Greek columns. The effect of all this art is purely spectacular.

To see more beautiful art, mingle with artists, and survey the city from on high, visit Montmartre. The area has been a site of worship for two millennia, but the Basilica of Sacre Coeur was finished right before the Great War. Inspired by churches such as St. Mark’s in Venice and Hagia Sophia in Constantinople, its Romano-Byzantine style features a mosaic of Christ that is one of the largest in the world. The surrounding hilltop area is filled with artists using the beautiful view for inspiration. Nearby is Pigalle (the red light district) where the famed Moulin Rouge is located.

Paris is more than the city of lights, or the city of love…it is the city of inspiration. There is something in the air that inspires you to create. You believe that you could be a great chef, painter, sculptor, architect, or lover. Paris makes you walk a little taller, speak a little smarter, dress a little chicer. Paris is the city of dreams. I hope that your dreams come true soon.

Bonus spot: As the Palace of Versailles is not in Paris (about an hour train ride), it didn’t make the cut for the top 21 places to visit in Paris. But it is a 17th century marvel not to be missed. Feast on its over-the-top décor. Fancy yourself a courtier of Louis XIV. Take the day to explore the grounds and revel in all that was pre-revolution monarchical France. 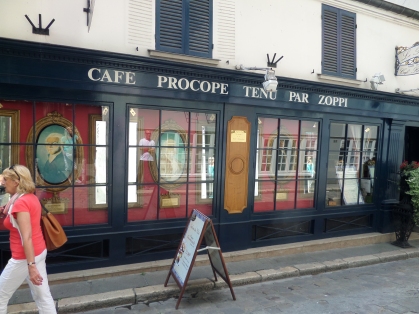 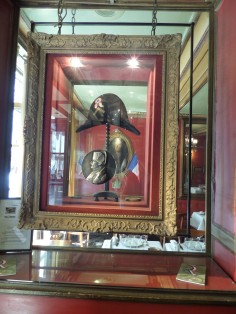 Back of Hotel Biron of Musee Rodin

2 thoughts on “Top Places to Visit in Paris—Part Deux”