I remember the first time I explored the grounds of the former Traverse City state psychiatric hospital (Northern Michigan Asylum among other names). I thought the buildings were some of the grandest and most beautiful that I had ever seen. The main building reminded me of a castle with its expansive size, towers, and elongated windows. I dreamed of living there as the grand dame of the manor. Although still being renovated, a few shops and a restaurant were open. I could experience its interior and daydream until my heart was content! My husband and I wandered the grounds and became completely smitten with the property. On my last trip then I was delighted to interview the developers of this complex, Ray and Raymond Minervini, who saved the buildings from ruin. Too frequently we tear down our history. Building anew is often less costly than preservation. It takes vision, respect for heritage, passion, and hard work to restore a historic building—qualities evident in the father/son Minervini duo. Due to preservation challenges, historic buildings are becoming rarer to find. To me, this is a tragedy; I find the idea of a world without physical history too depressing for words. I love looking at old buildings, imagining the great parties and events that occurred in them, appreciating their architectural details, and letting them transport me to another era.

For over 100 years, Michigan operated a psychiatric facility on the grounds that are now known as The Village at Grand Traverse Commons (http://www.thevillagetc.com/). The sprawling building dubbed “Building 50” featured rich architectural detail, common gathering rooms, high ceilings, and plentiful windows. The hospital was built on the Kirkbride Plan that emphasized moral treatment of patients—in beautiful surroundings. Patients of the hospital were encouraged to farm, tend animals, and contribute to the self-sustainability of the grounds. The facility closed in 1989; by the late 1990s, there was talk of demolishing the buildings against the wishes of preservation groups in the area. It was at this point that the Minervini Group stepped in with a proposal to develop the buildings for commercial and residential use. To do so, zoning had to be changed and minds convinced that this would be a good move. Thankfully, preservation plans won out—the buildings were saved from destruction and the Minervini family could redevelop the structures and land. Ray had a vision for the property inspired by community-centric villages of Italy. He wanted to design a thriving neighborhood in this urban area where everything that one needed was in close proximity. A place where community members could strike up a game of bocce ball, stroll tranquil grounds, plant urban gardens, or join together in celebration.

Preservation of the historical buildings was no easy undertaking. The sheer scope of the project was immense. Building 50 alone is 400,000 square feet…and there are several smaller buildings on the property, too. The group in charge of disposing of the property had held an auction before the Minervini’s took ownership. A lot of the original furnishings were sold off, but Raymond shared some of the treasures that were uncovered as renovation was underway—a china teacup and saucer, as well as an ornate door latch that spoke to the attention to detail in the building’s construction. The level of finish was top of the line! They also found political campaign materials from the 1920s, straight-edge razors entombed in cement, and implements from the vast laundry operations of the facility. The Minervini’s were able to acquire the superintendant’s journal from the asylum’s construction, which provided a unique look into the past. Today, historical tours are offered frequently; visitors can engage with the property’s past while enjoying its present offerings. (http://www.thevillagetc.com/tours/)

The Village at Grand Traverse Commons exemplifies how historic buildings can be saved for the admiration and education of future generations while providing modern amenities, utility, and economic development. Ray Minervini’s vision for an independent community has been achieved. The upper floors of the main building have been converted to both luxury private residences and affordable apartments, while the ground-floor “Mercato” provides residents with two Italian restaurants, various retailers, floral design, a bookstore, and much more. Condo owners don’t need to leave the grounds to catch a yoga class, have their hair styled, visit a physician, or consult a business professional. Fresh baked goods are only a few minutes’ walk away, as are two wineries, coffee houses, and a café. During my numerous visits to the “Village,” I have enjoyed fine food at Trattoria Stella (Stella’s puts out amazing Italian food) and one of the best French-pressed coffees I have ever sipped at Higher Grounds. Most every time I’ve traveled to the “Village” an event of some sort has occurred—food and wine markets, film fests, or art shows. Residents walk their dogs through the peaceful parks, always greeting me with a smile. In our interview, Ray recounted the old adage, “Grief shared is halved, joy shared is doubled.” He and his son have a created a community that allows for that sentiment to come true. 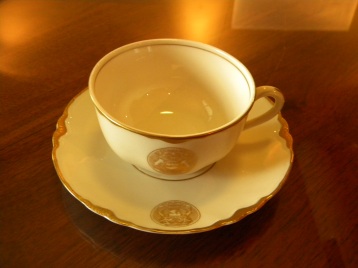 A saucer and cup from the former facility 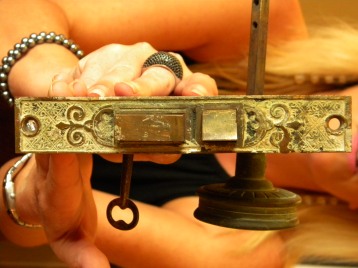 The level of finish on the facility was top of the line. 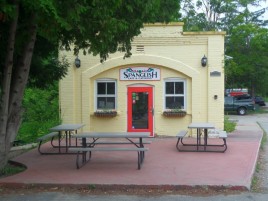 A cafe on property

A bakery on site