Upon walking up to the Conciergerie, I thought to myself that never was there such a pretty prison. With its turrets capped with slate-blue roofs that provide striking contrast to its white walls, the former palace/prison is quintessentially French.

The building has undergone several incarnations. Clovis, the first French king, established his royal residence on this site, but it was Louis IX (1214-1270) who installed a royal chapel (Sainte-Chapelle). His grandson, Philip IV (1268-1314), turned the palace into the seat of the Parlement de Paris, commissioned the Hall of Men-at-Arms, fortified the building, and added the towered façade that runs along the Seine. Charles V moved from the residence in 1358, but the building stayed an administrative center. It was Charles V who appointed a “concierge” to run the Palace and the prison thus giving the place its name—Conciergerie.

It was the aspect of the building as a prison that drew me to this monument. I wasn’t there to see another palace (Paris is filled with them it seems), I was there to spend time in the last place that Marie Antoinette would live before being taken by cart over two kilometers to the Place de la Révolution (Place de la Concorde) where she would ultimately lose her head.

As an American historian, I have a great fascination with the French Revolution. Our revolution was aided by the French and, indeed, many of our founding fathers were inspired by Enlightenment theories being espoused in France. The French Revolution was marked by political and social upheaval. Terror reigned—over 16,500 people lost their lives to the guillotine and many more prisoners died awaiting trial. The Revolutionary Tribunal that decided the fate of prisoners sat in the Conciergerie and used it as a prison.

As I entered the medieval hall (Hall of Men-at-Arms) with its buttressed ceilings and fireplaces large enough to fit a man inside, I imagined people taking their meals there. 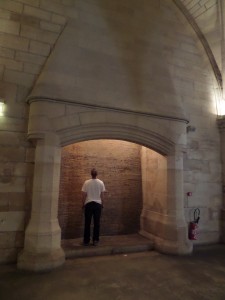 Were they jovial, or were they serious? Perhaps, they were scared that someone would denounce them next and that they would face their former comrades?

I journeyed through the great hall into the guardroom and then through to the revolutionary halls. The Prisoners’ Gallery was a place where prisoners could roam freely. In this section, you see reconstructions of the Clerk’s Office, the Concierge’s Office, and the Grooming Room. Upstairs, there are exhibits about prisoners. As I moved toward the cells, I was struck by the inequality of accommodations. Prisoners paid for their lodging. Even during a revolution to equalize citizens and do away with notions of divine right, those with money could afford more comfortable quarters and time in the garden.

Although her cage may have been more gilded than the other prisoners, how Marie Antoinette must have feared. Her husband was already dead and she must have worried incessantly about the fate of her children. Today, they have created an exhibit of her cells.

As I wandered back through the great hall and left the prison, I looked up at window with a trefoil design. The light shining in was a stark contrast to the gloominess of the prison area and the solemnity of the place. I walked back outside and wandered around the building. I think that the best museums are those where the building is the largest artifact in the collection. In this case, the building was a sobering reminder of the horrors of war and the violence that has sprung from despair and inequality. In my opinion, it is one of the top things to do when in Paris. The Conciergerie is a great Paris museum and I would highly recommend a visit as it is an important part of our history.

Going to France, Italy, or Spain? Roaming Historian readers can save money on tours from The Tour Guy. Just use our link when booking to get 5% off of most small-group tours. Bon voyage!