When visiting New York City, a historic site that can’t be missed is Ellis Island. Located in the New York Harbor, the island is easily accessed via ferry from Manhattan at Battery Park or from New Jersey at Liberty State Park.

Under the Immigration Act of 1891, the federal government became responsible for regulating immigration. In order to carry out this duty, they built an inspection center at Ellis Island which they used to examine the health of immigrants attempting to come into the country. The Main Immigration Building opened on December 17, 1900; the Main Hospital building opened in 1902.

Millions of immigrants passed through Ellis Island during the peak of immigration to the United States. It became the most bustling port in America, busier than other major ports (Boston, Baltimore, Philadelphia, Galveston, San Francisco, New Orleans and New York at Castle Garden) had been in the past or were at the time.

The trip across the Atlantic Ocean was very rough and many immigrants arrived ill. For some prospective immigrants, contagious diseases caught on the way over meant they were denied entry and were sent back to their home country. I can only imagine how devastating it must have been to have saved for so many years and have one’s hopes and dreams dashed by contracting an ailment on the voyage to their dreams.

The history of Ellis Island has inspired many books and I can’t do it justice in a short blog, so I’ve included some questions I think readers might wonder. Feel free to ask any you have in the comment area and I’ll try to answer them if I can when I have time.

What was the island used for?Processing immigrants.

Who was the first immigrant to be processed? 17-year-old Annie Moore of Ireland in 1892.

Number of people who came through? More than 12 million people.

What happened when you arrived? Immigrants first had to pass a medical inspection and then a legal examination where they had to remember the information they had submitted before boarding the steamship to come over to America. There were almost 30 questions which were used for cross-examination once they arrived. If their arrival answers matched their departure answers they would be admitted; if not, they were detained for further questioning. This went very quickly and efficiently, but immigrants would still have been under a lot of pressure.

During the peak period, most immigrants were admitted. The main reasons for exclusion were suspected danger to the public health or suspected burden on the public welfare. Contrary to some rumors the tests were given in a multitude of languages other than English. Common languages spoken at Ellis Island included: Italian, Polish, Ukrainian, Slovak, German, Yiddish, French, Greek, Hungarian, Russian, Ukrainian, Serbo-Croatian, Romanian, Swedish, Portuguese, Bulgarian, Czech, Spanish, Armenian, Arabic, Dutch, Norwegian and Chinese.

What can you see today? Ellis Island National Museum of Immigration is a restored building where immigrants entered that you view as part of regular admission and/or you can also take the Hard Hat tour of South side of Ellis Island.

It is best to get tickets ahead of time. You can reserve with a tour company (see our recommended affiliate link below with Take Walks Tours) or through Statue City Cruises online (see National Park Service link) or at the official ticket office inside Castle Clinton in Battery Park. You can also reserve via phone: 1-877-LADY-TIX (1-877-523-9849) or 201-604-280. Another in-person location would be at the ferry departure point ticket booths at Battery Park in Manhattan or Liberty State Park in New Jersey. Statue City Cruises is the official ferry service provider.

Statue of Liberty, Ellis Island, and 9/11 Tour with priority One World Observatory tickets 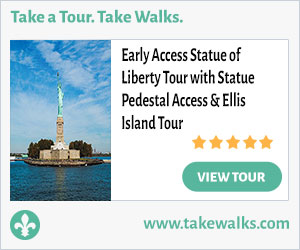 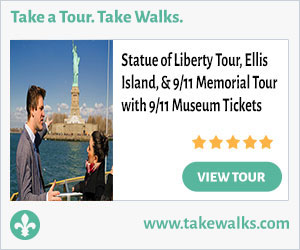