The Arno River cuts through Florence, dividing the historic center of the Italian city from the less-touristy Oltrarno side. For centuries, trade along the river fueled Florence’s commerce and, thus, its prosperity. Beautiful bridges, including one designed by Ammannati (with Michelangelo’s help perhaps), crossing the river were designed in a manner fitting the waterway’s importance. The most famous (and fanciest) is the Ponte Vecchio. Distinguished by buildings spanning it and the Vasari Corridor running atop those shops, tourists travel in droves to visit this iconic bridge’s stores and take pictures. How many of those visitors know its history though? This blog is devoted to celebrating the most famous Florence bridge, Ponte Vecchio (literally “old bridge), and uncovering some of its secrets.

Why is it called the old bridge? Some type of crossing has existed at this point of the Arno River since Roman times. It is a narrow point of the waterway so an overpass at that location made sense. As Florence grew so did the need for more ways to cross the river, so Ponte alla Carraia was built nearby (ponte means bridge in Italian). Allegedly, locals referred to this one as the “new bridge,” thus relegating the long-standing one as “old.” The current iteration that we see today was rebuilt in 1345 after the previous one had been destroyed by flooding. Giorgio Vasari wrote that Taddeo Gaddi was the designer, but we cannot be sure of that attribution since Vasari was reporting two centuries later and the historical record is sparse. It may have also been Neri di Fioravanti. As with most bridges, Ponte Vecchio originally had a defensive purpose with two towers at either end. War and time have erased all but a portion of the Mannelli tower, which withstood the ages…and Medici encroachment. Reputedly, when the Medici had the Vasari Corridor built they ask the family to tear down their tower, but the Mannelli refused forcing the Medici to build around it.

What does it look like? One thing that will strike most visitors is that the Ponte Vecchio is covered with buildings. Unlike normal bridges where cars drive over to get from one side of a river to the other, this one is pedestrian-only. There are three arches on the western side with a large piazza in the center. On the eastern side is a bust of the great artist (and goldsmith) Cellini, which sits atop a fountain. This proves to be a popular place for pigeons and people–both can be found in flocks. A stone with an inscription from Dante’s Paradiso records the spot where Buondelmonte de’ Buondelmonti was murdered. A larger Guelph/Ghibelline conflict encompassed this event and draws the Ponte Vecchio into this fascinating period of Italian history.

The rest of the bridge is lined with shops. Merchants have been there for centuries, but they were not always dainty stores selling fine jewelry. From the 1440s until a decree in 1595, butchers monopolized trade on the bridge. That would change as the bridge grew to include a corridor across it designed by Vasari.

What is the Vasari Corridor? It is an enclosed, elevated walkway connecting two palaces by running atop the Ponte Vecchio. The path provided safe passage from the Palazzo Pitti (the Medici’ home) to the Uffizi (Medici offices) and Palazzo Vecchio (seat of government). Built in 1565 at the behest of Cosimo de’ Medici, the Giorgio Vasari-designed structure gave him a way to get from home to work without worrying about getting a knife in his back. Subsequent Medici family members and friends could cross over about a half mile of Florence without being seen. The corridor even allowed the Medici the ability to worship in privacy. At one point along the passageway there is a balcony that looks out onto Santa Felicita Church. The ruling family would have a perch with an obstructed view of the altar. Rumor has it that Ferdinand I didn’t like the smell that wafted up from the butchers on the bridge into the corridor. A 1595 decree saved the nobleman’s nose from olfactory offense by banning butchers from selling meat on the Ponte Vecchio. Still in effect to this day, the law made goldsmiths and jewelers very happy as they could dominate trade. Their wares still glisten in the Tuscan sun delighting shoppers from around the world.

Why wasn’t the Ponte Vecchio destroyed in WWII? Nazis bombed all the other Florentine bridges save this one. Legend has it that when Hitler had visited it previously with Mussolini he had seen beautiful artwork lining the famed Vasari Corridor. Since Hitler greatly admired art, he ordered the bridge spared. Another story tells the tale of Gerhard Wolf (the German representative in Florence during WWII) giving the order to save it. A plaque on the bridge, by the western arches, honors this man’s actions. The plaque, in Italian, translates: “Gerhard Wolf (1886–1962), German consul, born at Dresden…played a decisive role in the salvation of the Ponte Vecchio (1944) from the barbarism of the Second World War and was instrumental in rescuing political prisoners and Jews from persecution at the height of the Nazi occupation. The commune places this plaque on 11 April 2007 in memory of the granting of honorary citizenship.” Who knows what actually transpired and who deserves credit, but whatever caused the German military not to proceed with their plans for destruction…we are all thankful! Sadly, the rest of the bridges were reduced to rubble; their remnants were later dredged from the water and reconstructed though.

Should I see the Ponte Vecchio? Yes, definitely. The old bridge reminds me of a market filled with hustle and bustle. Musicians play, itinerant salespeople try to coerce tourists into buying their object of the day, and artists sell their designs. The prices for jewelry here are a little inflated, but the ambience is priceless. The bridge is beautiful at any time of the day, but is especially intoxicating at sunset when the doors to the stores have closed and their medieval design is exposed. With soft music and the sound of revelry in the background, you can survey the river and watch as the sun shines its last beams on the banks of the Arno. The buildings on either side of the river are bathed in muted gold and the smell of grills getting ready to cook the famed Florentine steak perfume the air. It is simply magical…and a Florence must-see.

Looking to get around Italy comfortably and easily? Consider ItaliaRail’s website and 24/7 customer service in English. Check them out through our partner link: https://italiarail.2lka.net/eG03z 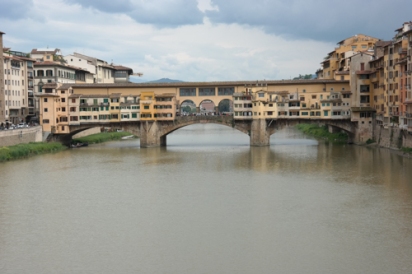 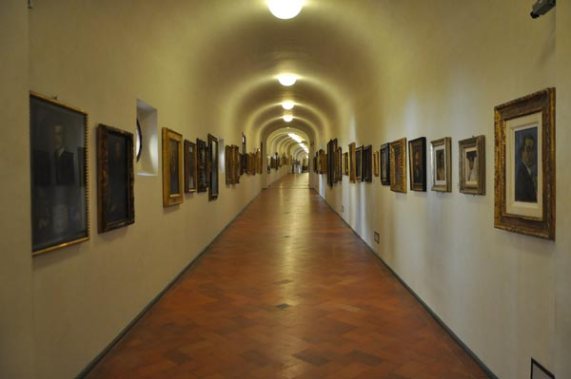 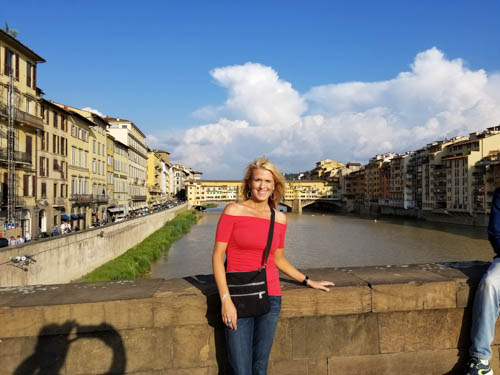