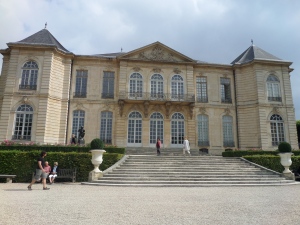 The other day, a colleague recounted a story about how he and his partner owned a Rodin statue that they sold for a tidy sum (paying for bathroom remodeling and a car). Horrified, I exclaimed, “I would eat canned peas for life and use a bucket (actual use for bucket was crass) if it meant that I could own a Rodin.” Although I have had a nearly life-long obsession with Belle Époque artists, my passion for Rodin’s work grew last year when I visited the Musée Rodin. At this great Paris museum, I could see Rodin’s The Thinker up close and personal. I roamed through the neatly-trimmed gardens to uncover more Rodin sculptures at every turn. And then…I was able to experience the magnificent mansion where Rodin worked–the Hotel Biron. This Paris museum is a definite “must-see.” Although there are many things to do in Paris, make every attempt to stop by here on your next visit.

Auguste Rodin (1840-1917) conceived of the idea for his museum. His life’s work had run hot and cold with the art community. His art was at times billed as genius and other times considered subversive and scandalous. During WWI, Rodin suggested donating his entire collection to the French nation. They accepted the donation and voted to establish the museum at the Hotel Biron (the French use hotel to describe a grand house) where Rodin had worked since 1908. Rodin died before his museum opened to the public. Due to war delays, the Musée Rodin opened its doors on August 4, 1919.

Walking along the cobble-stone pathway, the mansion beckoned to me. Although I was surrounded by manicured gardens, blooming roses, some of his greatest works, and a spectacular view of Les Invalides, I couldn’t wait to see the inside of the 18th century Hotel Biron. The house had been a private mansion, a Catholic school for girls, and, during Rodin’s time, an artist’s haven—Isadora Duncan opened a school of dance on the grounds, Matisse had a studio there, and Auguste Rodin occupied a suite of rooms where he received visitors (he lived in Meudon). 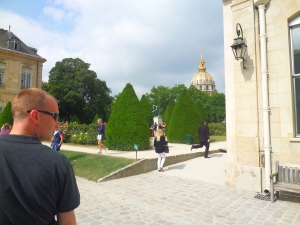 I practically raced up the steps to enter the house. Some of the rooms were almost as grand as the art within them. I was swept up in the history of the time. Rodin experienced the optimism, peace, innovation, and prosperity (for some) of La Belle Époque (1871-1914). During that time, Gustave Eiffel built a tower for the 1889 World’s Fair in Paris, the Impressionist movement gained steam, the arts flourished, nouveau riche wore haute couture and ate haute cuisine at ritzy restaurants like Maxim’s. People marveled at the Folies Bergère and watched cabaret at the Moulin Rouge. Like the Gilded Age in the United States, there was a stark contrast between the excesses of the rich and the moderation of the poor. Rodin, having some acclaim though, was able to experience La Belle Époque at its finest.

I highly recommend a visit to Musée Rodin. Walking through the home and the gardens amidst some of Rodin’s finest works is an experience not to be missed. Make sure that you see the works of his mistress, Camille Claudel (Rose Beuret was his wife for you Midnight in Paris fans). Below are some of his works that spoke to me.

Going to France, Italy, or Spain? Roaming Historian readers can save money on tours from The Tour Guy. Just use our link when booking to get 5% off of most small-group tours. Bon voyage!